Tteokbokki: A Korean After School Staple

Leaving home after a long day at work. Though it is late at night, there are still many businesses open and people out and about. You see some plumes of steam rise from a stall nearby. Approaching you are greeted with a rejuvenating and savory wall of vapor from the many different boiled, broiled and steamed dishes available. But it is a deep vat of deep reddish-orange that catches your eye. There’s Tteokbokki! A Korean spicy rice cake dish.

You order a small batch of this dish. You are handed a tooth pick with which to eat each of the thick, plump morsels awash in the red, steaming sauce. The smell is both sweet and spicy, and the soft, sometimes wiggly cylindrical morsel you just tried is a rice cake. You are first taken by the softness of the rice cake, biting into it, it’s almost like a marshmallow it is so soft and chewy! Then, you are quickly greeted by the sweet and incredibly spicy sauce! Some layers of fish cake also can be found and you soon find your cup completely empty. You have even taken a big gulp of the sauce!

Experiences like these are very common in Korea from students leaving school and en route to the many different academies and after-school activities they take part in as well as adults, either out late drinking and feeling in the mood for a sweet yet bitingly spicy treat or en route to home from a busy day at work. This is the wonderful ways people enjoy tteokbokki (떡볶이). Also Anglicized as “Tteok-bokki” or “ddukbokki”, this dish is a real treat and has a ton of different variations and served at a few different types of venues. But be aware! No matter what your tteokbokki preferences are, the sauce will be both hot temperature wise as well as in the spice department!

One may be a bit surprised to learn that tteokbokki, a humble food sold at street stalls and a mainstay for hungry children after school, was actually a dish prepared for the royal court. Though this version involved many other ingredients like sirloin and high quality soy sauce. Over time, the other ingredients like beef and pine nuts would vanish from the basic preparation of tteokbokki but soy sauce and tteok (rice cake, in this case cylindrical cuts of it).

The first modern version of tteokbokki is believed to have been invented from a lucky accident. Ma Bok Lim, after having accidentally dropped tteok in a vat of hot sauce found that the combination was actually rather tasty. And so she decided to sell the first modern and commercial ttoekbokki in Seoul’s Sindang, which is still a place to grab choice tteokbokki to this day. The dish was popular because it was cheap, quick and easy to make. This was all during the 1950’s in the wake of the Korean War and the painful post-war eras for Korea, when the economic situation for the country at large was in a desperate place. Remarkably, after the economic recovery and subsequent higher level of affluence many Koreans enjoy today has not stopped this dish from maintaining its popularity.

Today it can mainly be found at bunsik restaurants, which serve other snack type dishes like kimbap and at pojangmacha, which are street stalls, some of which operate out of the back of trucks.

The basic recipe for tteokbokki includes the white, cylindrical rice cakes stir fried with gochujang, which is a thick, spicy red pepper paste sauce. Some other ingredients one may find in their tteokbokki may include eomuk, with are thin layers of fish cake, hard boiled eggs and scallions. The resulting dish has an aroma that is sweet and savory and a flavor that is salty, sweet, spicy and savory, too. The texture of the dish is chewy and at times thick, depending on how thick the tteok is! Other styles include…

If you ever find yourself in Korea, whether it is mid afternoon or 3 in the morning, keep your eyes peeled for this stunning dish. From the royal court, to a snack on the go, tteokbokki is there whenever and wherever you may be hungry! Just remember, that sauce is tasty, but very spicy, so be prepared, too! 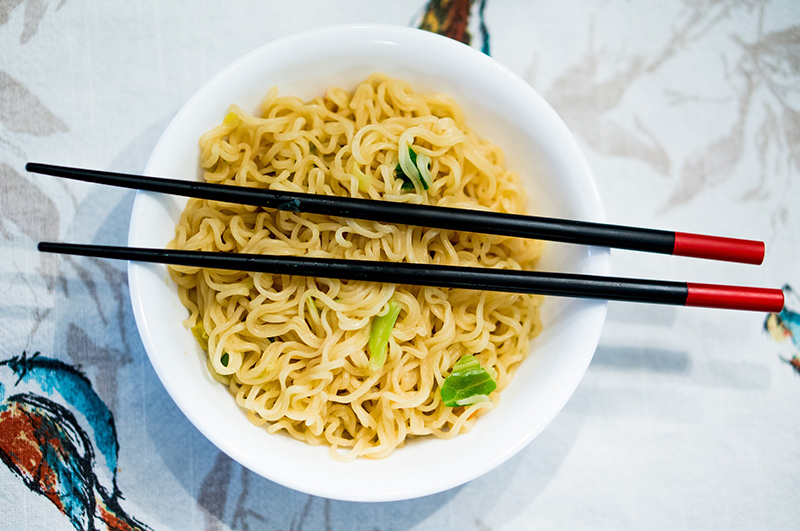